ask for a quote

ask for a quote

Based on its expertise, dasco intends to make every effort to be the market leader in heat exchangers.

Speak with a human to filling out a form? call corporate office and we will connect you with a team member who can help. 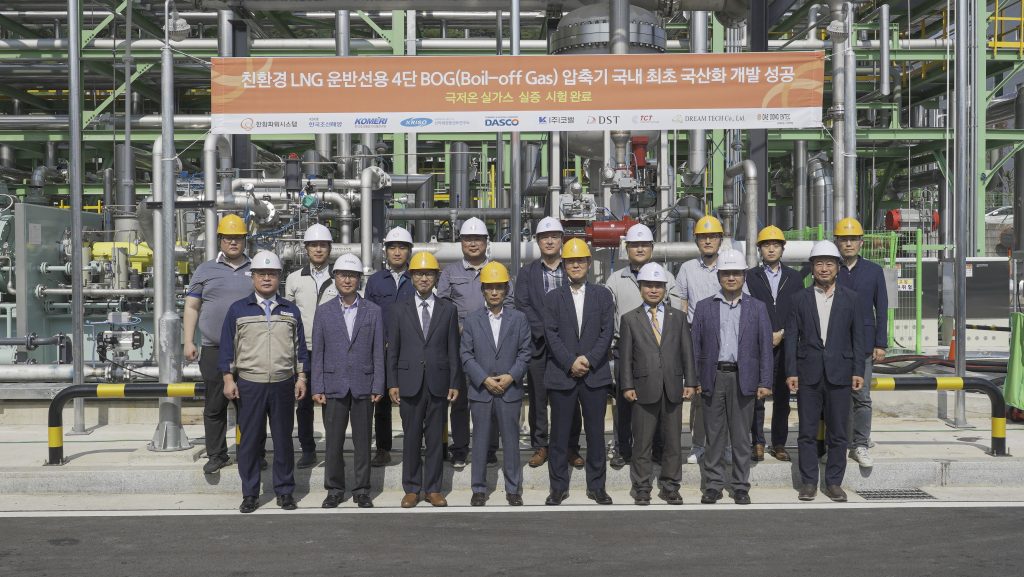 [Reporter Hyo-moon Seo of the Korea Financial Times] Hanwha Power Systems (CEO Sohn Young-chang) is a 4-stage LD (Low Duty) compressor, a BOG compressor for eco-friendly LNG carriers, which the Ministry of Trade, Industry and Energy has been working on as a shipbuilding and offshore technology development project at a cryogenic temperature (-120 degrees Celsius). ) announced on the 17th that it had succeeded in the localization of key equipment for LNG carriers by jointly conducting a demonstration test with Korea Offshore & Shipbuilding, Korea Shipbuilding & Marine Engineering Research Institute (KOMERI), and Ship & Offshore Plant Research Institute (KRISO).

For LNG carriers, the Mark Ⅲ of GTT is most widely applied for cargo tanks that store LNG. In 1969, when the Mark Ⅲ product was first released on the market, the Boil-off Rate (BOR), which is the daily BOG generation ratio compared to LNG, was 0.15%. With the improvement, BOR was reduced by half to 0.07~0.085%. Due to the reduction in BOR, the flow rate required for the LD compressor has also decreased from a maximum of 5,000 m3/hr to 2,200 to 3,000 m3/hr. It is a situation that demands development.

Through the development of the technology reflecting the needs of domestic shipbuilders, we developed a 2,800m3/hr class 4-stage LD compressor to handle the BOG flow rate of 2200~3000 m3/hr, and secured reliable products through classification certification and real gas test. Based on this, the goal of this national project was to develop a 4,000m3/hr class 4-stage LD compressor to be mounted on a 260Km3 class LNG carrier. Unlike ground-mounted equipment, ship-mounted equipment must consider ship motion and unexpected situations that may occur during operation, and also consider the impact of vibration transmitted from the hull itself or from other equipment. To this end, Hanwha Power Systems standardized drawings and technical documents by reflecting ship characteristics and control logic actually operated in LNG carriers from the development stage through cooperation with Korea Shipbuilding & Marine Engineering, which participated in this national project. With the validation test results approved, the product commercialization stage has been reached.

LNG (natural gas) is the fastest growing demand in the world energy supply and demand, and the development of large-scale LNG projects is in full swing due to a sudden global supply imbalance caused by the recent Russia-Ukraine war. Hanwha Power Systems plans to complete the development of a 4-stage LD compressor through this national project and, at the same time, supply key equipment for LNG carriers to domestic shipbuilders, including Korea Shipbuilding & Marine Engineering, participating in this project in cooperation with domestic small and medium-sized enterprises. to be. As a result, domestic shipbuilders can replace the core equipment they depended on foreign companies with high-performance and reliable localized equipment, and are expected to secure more stable product supply and follow-up support.
.

Hanwha Power Systems established a development network for domestic shipbuilding and offshore equipment by jointly carrying out design verification and demonstration tests of 4-stage LD compressors with Korea Offshore & Shipbuilding, Korea Shipbuilding & Marine Engineering Research Institute, and Ship & Offshore Plant Research Institute. Tech, TCT, DST, and Daedong Entech will also participate in this project and will contribute to securing the domestic shipbuilding and offshore parts supply chain by conducting empirical tests on cryogenic valves for ships, control panels, oil systems, and heat exchangers. As a result, it is expected to significantly contribute to the creation of jobs for domestic equipment and materials companies through the effect of substituting imports of equipment and materials worth about KRW 5 billion per LNG carrier, as well as improving the trade balance due to the expansion of new orders for LNG carriers.